Ripped and Torn 11 - A Cheap Night Out with Raped

Got a nice old copy of Ripped and Torn today.  Tony D was really getting into it by issue 11...a bit of colour on the covers and over 25 pages loaded with articles, interviews, reviews and opinion.  This issue has Raped on the cover with a 2 page interview inside, also interviews with the Only Ones, Billy Idol and Levi and the Rockats plus a couple of 2 page photospreads (NY Dolls and Derek Jarman's Jubilee). 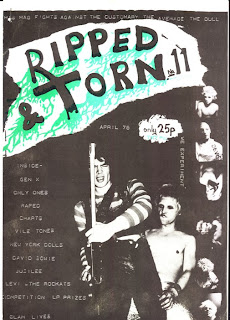 To tie into this issue I'm also posting a classic single by Raped..  A 4 piece from London featuring Ziggy like lead singer Sean Purcell, guitarist Fabian Kwest, bassist Tony Baggett and distinctive Japanese drummer 'Paddy'.  Their first EP, 'Pretty Paedophiles', got them a lot of negative publicity and combined with their camp/gay image (which they actively played up!) at a time when punk was heading towards leather jacketed uniformity meant they didn't have an easy time of things.  Their gigs often had an edge to them as they always got abuse from some of the audience and were prepared to give as good as they got..  At one gig at the Moonlight in West Hampstead Sean and Fabian jumped off the stage and attacked a guy who had chucked a pint over Sean and I remember Sean pulling a knife out on stage at another gig..  Musically they were mostly thrashy '77 style punk, shock value lyrics but with a few good tunes ('Moving Target' and 'Escalator Hater' from the first EP were ok) but suddenly in '78 they came out with 'Cheap Night Out'.  Similar lyrics to their earlier stuff but it added a great glam rock sound.. It deserved to do better but never really took off and they stayed stuck in the small club circuit.  They changed their name to Cuddly Toys in '79 and moved further towards the glam sound, releasing a nice cover of a Bowie song, 'Madman' later that year.  They kept going till 1981 and apparently finally found a bit of success in Japan towards the end.. 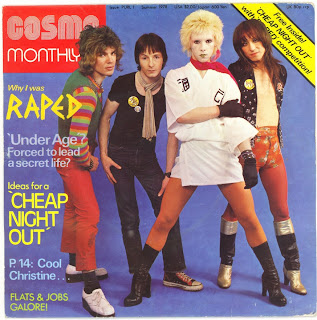 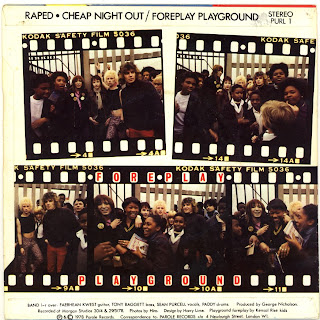 Here's the insert that came with the 45..forgot about this when I first did this post..
Download Cheap Night Out insert


I also found this old publicity photo, printed when they were called Raped but with their name trimmed off after they became Cuddly Toys! 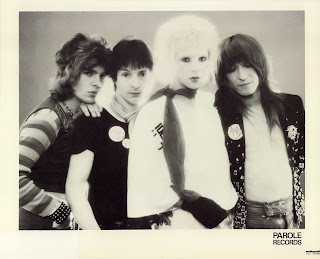