The Sound of the Westway #2

Here's a fairly obscure west London fanzine from mid 1977..  Put together by Derek Gibbs, John Ellis, Alan Dearling and a few others, it's a hand written effort, illustrated with drawings but with nice collage front and back covers.  It starts with an article on the trouble s between punks and teds at the time, a Vibrators interview, Mink Deville and generation X gig reviews, record reviews plus some funny mini interviews in a section called 'How to Annoy Pop Stars' (Kid Reed of the Boys says Mick Jones was briefly in the Hollywood Brats,  Derek asks Mick who denies it,.. I'll have to dig into that one..).

Derek got his photo on the cover of Phonogram's 1977 punk compilation 'New Wave', gobbing beer at the photographer as we did back then.. nice. He was later lead singer of west London group The Satellites in around 1978-80.. a great live band.  I'll try to get their 45 Urban Guerilla posted up here some time soon..

Anyway, this is a great fanzine.. hope you enjoy it.. 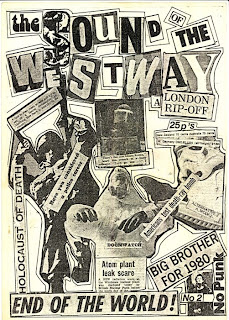 Download The Sound of the Westway #2
Posted by DaveO at 01:18